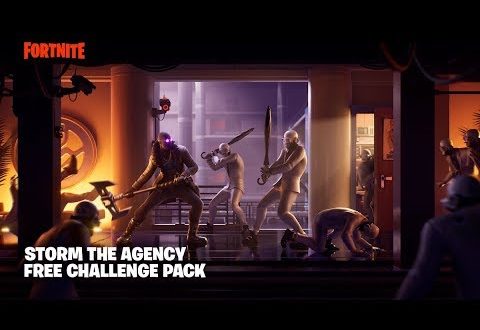 All Fortnite fans should know by now that the new season will soon arrive. Fortnite Season 3 is on the way! The upcoming season will be released next week. However, Epic Games is very good at keeping the fans entertained. There is a new Challenge Pack!

The new challenge was just made available, but what do players have to do? Storm the Agency Free Challenge Pack, has five challenges for the fans. Players can enroll in this mission to complete its five challenges before the new season comes out.

As for any challenge, there is a reward. Players will have the chance to win a trio of rewards! That includes a Shadow Seal Wrap, Steel Shadow Pickaxe, and a Shadow Stalker Glider. Of course, players will also earn bonus XP. But that’s not all. The Item Shop will offer Renegade Shadow outfits in multiple styles. These outfits come with Blast Radius Back Bling.

Storm the Agency Free Challenge Pack in Fortnite will task players with the following:

Download the new image for free! Players can find it in the Item Shop and even send it to their friends. See the image in the below Tweet.

Step out of the shadows and Storm the Agency 💣

Complete free challenges to earn a Wrap, Glider and Pickaxe along with plenty of XP.

When Epic Games announced the delay of the upcoming season, the fans were sad. However, they sure did have a lot of events to enjoy until the release of season 3. Do keep in mind that Fortnite Season 3 is launching on June 4. However, that doesn’t mean they will get bored waiting.

Season 2 of the game is definitely ending on a high note with its Storm the Agency and the Doomsday Event.

Fortnite is available on PlayStation 4, Xbox One, Nintendo Switch, PC, and on the mobile platform.

Patricia W. Vandoren started working with the team at Feed Ride as a content writer with knack for news from different parts of the world expanding over various verticals. Now she detects potential tech trends and worthy subjects.
Previous Dead by Daylight expansion features Silent Hill content
Next Which Smartphone is The Most Popular from The World? The New Answer May Shock You

House MD: Why Kal Penn Left The Show So Early

GTA 6 Back in Full Production? What The CEO of Take-Two Interactive Says

Season 4 for ’13 Reasons Why’: Cast, Release Date, Trailer, and More